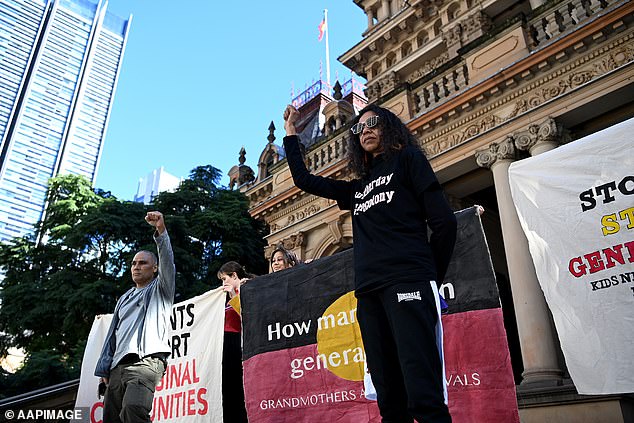 
Aboriginal activist says the Queen’s death is a time to rejoice: ‘We can’t mourn something that has colonised us for so many generations’

A controversial indigenous activist has sparked heated debate by declaring she won’t grieve the Queen‘s death and views her legacy as an embodiment of colonisation.

With the world mourning her death, some indigenous Australians have condemned her legacy as a figurehead of colonialism.

Among those who won’t shed any tears is Aboriginal Tent Embassy ambassador Gwenda Stanley.

‘We can’t mourn something that has colonised us for so many generations,’ she told the Sydney Morning Herald.

‘[The monarchy’s] legacy is that they had a privileged life due to the benefit from the genocide of Indigenous people right around this country.

‘If anything, it’s [something] to rejoice for many colonies around the world. Although she had many visits to Australia, there’s still the injustice of the genocides that she’s going to her grave with.’

But not all indigenous leaders share Ms Stanley’s views and have leapt to the Queen’s defence by claiming she inherited the role and can’t been blamed for what happened before her time.

Outspoken Coalition senator Jacinta Nampijinpa Price believes the Queen did ‘very well’ in her 70-year reign serving the Commonwealth and insisted many other indigenous Australians like her have much respect for the Queen.

I think we ended up in the best position possible in terms of the British coming to the shores,’ she said.

She added the results could have been ‘far more disastrous’ for Indigenous Australians had the country been colonised by the Spanish or Dutch.

The late Queen visited Australia 16 times during her 70-year reign. Pictured is the Queen during a visit to Canberra in 2011.

University of Canberra chancellor Professor Tom Calma agreed and pointed out that the Queen came to the throne more than a century and a half after Australia was colonised by the British.

But he believes the Queen’s death should reignite debate about Australia’s future in the Commonwealth and the prospect of another referendum, 23 years after Australians voted against becoming a republic.

Prime Minister Anthony Albanese has since hosed down talk of Australia soon becoming a republic any time soon.

Mr Albanese said out of ‘deep respect and admiration’ for The Queen he would not pursue ‘questions about our constitution’ at least until a possible second term in 2025.

‘Now is not a time to talk about our system of government, now is a time for us to pay tribute to the life of Queen Elizabeth,’ he told the ABC’s Insiders on Sunday.

‘That’s the system of government that we have, it’s one which as Australian prime minister, I have a responsibility to respect.’

‘Quite clearly, this is a time of national mourning.’

Australians will get a public holiday on September 22 to honour the Queen, three days after her funeral at London’s Westminster Abbey.