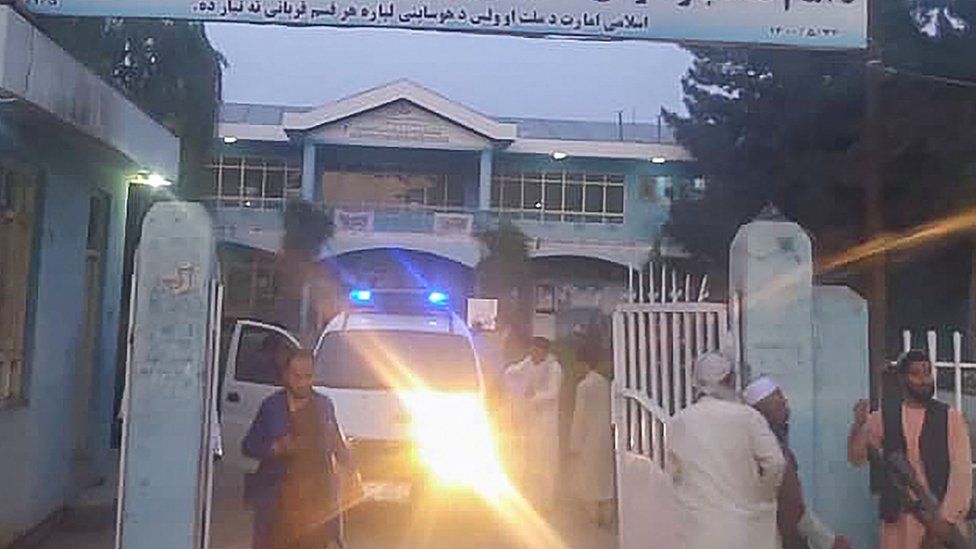 
A bomb attack on a Sunni mosque in the city of Kunduz in Afghanistan has killed 33 people and injured 43 others, including children, officials say.

The attack on the Mawlawi Sekandar Sufi mosque is the second in as many days in the northern city.

It follows four attacks across Afghanistan on Thursday – all claimed by the Islamic State group (IS).

The Taliban said they have defeated IS but the group remained a key security challenge to Afghanistan’s new rulers.

No-one has admitted carrying out Friday’s attack in Kunduz, which came as worshippers gathered to pray.

A local shopkeeper told AFP news agency: “The sight at the mosque was horrifying.”

The explosion was similar to Thursday’s bomb which tore through a Shia Muslim mosque in Mazar-i-Sharif, killing at least 31 people and wounding 87.

Admitting those attacks, IS said it was part of an ongoing global campaign to “avenge” the deaths of its former leader and spokesman.

Bomb attacks in Afghanistan have declined considerably since the Taliban came to power last August following the withdrawal of US and other Western forces after 20 years in the country.

IS does not control any territory in Afghanistan, but since their rivals, the Taliban, took power, they have been carrying out attacks in areas where they previously never had a presence, says the BBC’s Secunder Kermani in Pakistan.

Sufism, a mystical order of Islam, has been practised in the region for centuries. Most of the radical Sunni militant groups despise the Sufis, as well as Shia Muslims, as heretics.

IS militants also target the Taliban, with whom they have a fierce rivalry.

Responding to the attacks, Taliban spokesman, Zabihullah Mujahid, described the perpetrators as “evil elements”, adding “serious efforts are being made to arrest and punish them”.

The UN Deputy Special Representative of the Secretary-General and Humanitarian Co-ordinator for Afghanistan, Ramiz Alakbarov, said the attacks this week were “a painful reminder of the insecurity and dangers facing the Afghan people daily”.

“The indiscriminate use of improvised explosive devices, which has already caused more than 100 civilian casualties this week, is unacceptable and must cease immediately,” Mr Alakbarov said in a statement on Friday.