3 takeaways from the fifth day of January 6 hearings 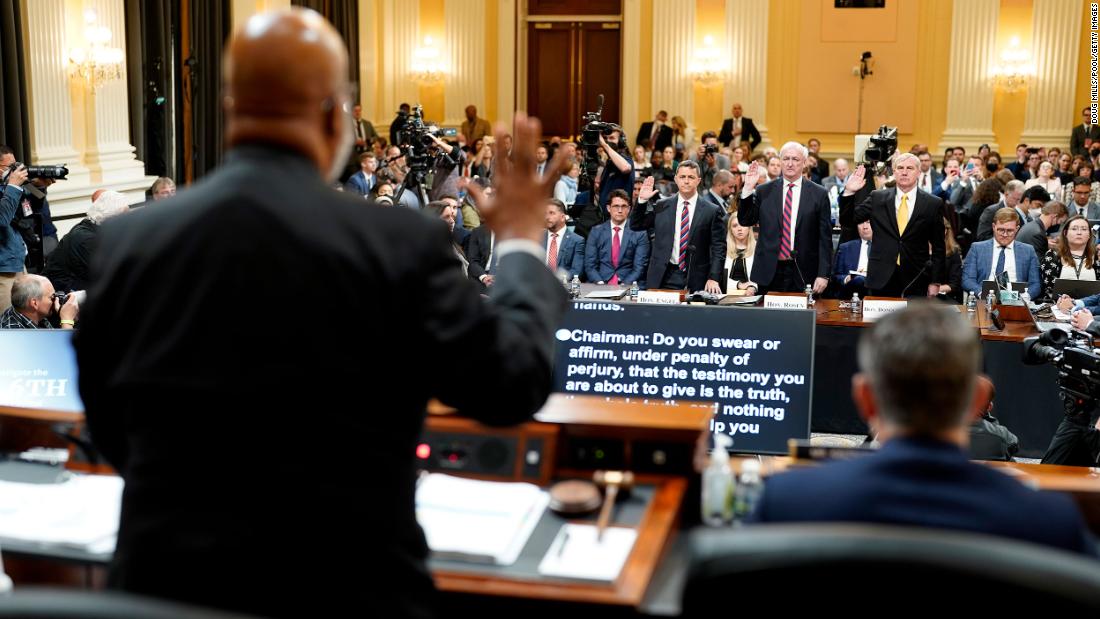 The hearing kicked off mere hours after federal investigators raided the home of Jeffrey Clark, who was one of the key Justice Department figures who was involved in Trump’s schemes. He has denied any wrongdoing related to January 6.

Three Trump appointees testified in-person on Thursday, joining a growing list of Republicans who have gone under oath to provide damning information about Trump’s post-election shenanigans. The witnesses were former acting Attorney General Jeffrey Rosen, his deputy Richard Donoghue, and Steven Engel, who led the department’s Office of Legal Counsel.

Here are takeaways from Thursday’s hearing.

The hearing brought to life a high-stakes Oval Office meeting in December 2020, where Trump considered firing the acting attorney general and installing Clark, who was willing to use the powers of federal law enforcement to encourage state lawmakers to overturn Trump’s loss.
Going into these summer hearings, we already knew a lot about the meeting. But on Thursday, for the first time, we heard live testimony from some of the Justice Department officials who were in the room, including Rosen, the then-acting attorney general. (He survived the meeting, after Trump was told that there would be mass resignations at the Justice Department if he replaced Rosen with Clark.)

Trump White House lawyer Eric Herschmann said Clark was repeatedly “clobbered over the head” during the meeting. He told the committee that he called Clark a “f—ing a–hole” and said his plans would’ve been illegal. He also said Clark’s plan to send letters to battleground states was “nuts.”

In videotaped testimony that was played Thursday, Donoghue said he eviscerated Clark’s credentials during the meeting, explaining that Clark was woefully underqualified to serve as attorney general.

“You’re an environmental lawyer. How about you go back to your office, and we’ll call you when there’s an oil spill,” Donoghue said in the deposition, describing what he told Clark at the White House meeting.

Donoghue himself described Clark’s plan as “impossible” and “absurd.”

“It’s never going to happen,” Donoghue said of the plan. “And it’s going to fail.”

Thanks to the pushback from Rosen, Donoghue, Herschmann, Cipollone, and perhaps others, Trump didn’t follow through with his plan, which would’ve put the country in uncharted waters, and would have increased the chances of Trump successfully pulling off his coup attempt.

Thursday’s proceedings featured testimony from three lawyers who described behind-the-scenes happenings at the Justice Department and White House. It was a departure from Tuesday’s and earlier hearings, which featured emotional testimony from election workers, and included jarring video montages of the carnage at the Capitol.

But even if there weren’t rhetorical fireworks, the substance of the testimony was essential to understanding the breadth of Trump’s efforts to subvert the 2020 election. The former Justice Department officials described what they saw and heard as Trump tried to enlist them to help him stay in power — and how he tried to oust them when they refused to do his bidding.

The material was dense at times. The witnesses reconstructed White House meetings and phone calls with Trump. They were asked to dissect their handwritten notes of some of these interactions — which is something you more often see at criminal trials, and less commonly at a congressional hearing.

Still, the witnesses’ steady testimony shed new light on events that we’ve known about for more than a year. And the entire hearing evoked memories of the Nixon era, because it was all about how a sitting president tried to weaponize the powers of federal law enforcement to help his political campaign.

The raid occurred on Wednesday but was reported on Thursday morning. It’s unclear which government entity was behind the raid, and it’s not publicly known what triggered the search of his home, or what investigators were looking for.

Even with these unanswered questions, it’s significant that federal investigators took such an overt step — raiding Clark’s home — against one of the most prominent figures in Trump’s post-elections schemes.

The committee was hoping to turn Clark into a household name Thursday, by eliciting testimony from top Justice Department officials about how he tried to abuse law enforcement powers to help Trump overturn the 2020 results in states that he lost. With the raid, it looks like the committee got its wish.