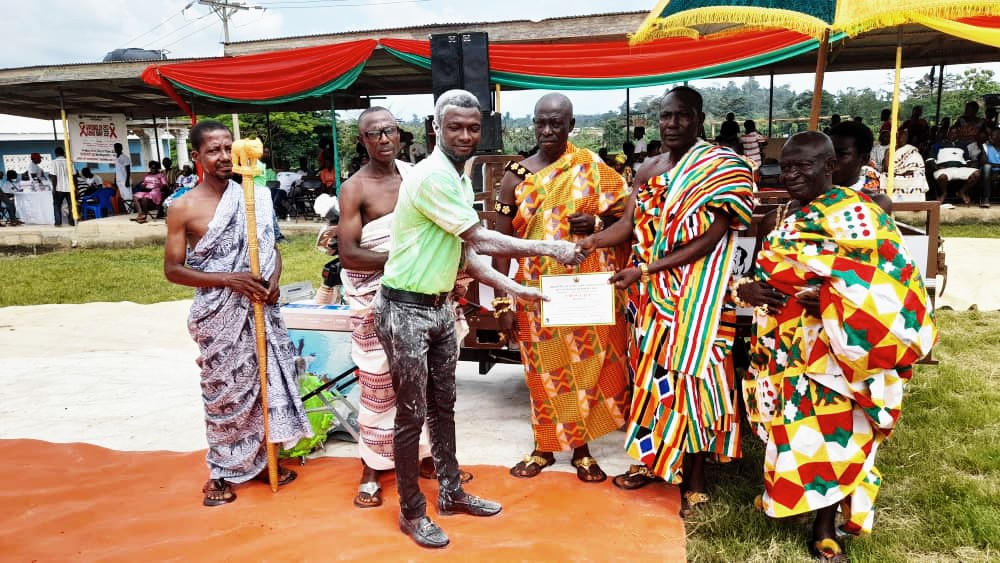 
It was all joy at Brofoyedru a farming community in the Akrofoum district when a 28-year-old farmer from Akrofuom, Joseph Tawiah Ayaaba was adjudged the overall district best farmer.

His award comes as a feather in the cap of the Assembly and the Agric Directorate, who have over the years campaigned to get more of the youth in the district to get involved in Agriculture.

The people of Akrofuom though are mainly into farming, most of the youth do not show interest in farming but are rather into mining.

This, the District Best Farmer, Joseph Tawiah Ayaaba said, was unfortunate but mentioned that his award will encourage the youth to develop interest in farming.

“I developed interest in farming at the age of 16 and have not looked back. I encourage the youth who have interest in farming to work closely with the District extension officers, who will guide them to adopt the best farming methods to increase yield”, he added.

The District Chief Executive, Maurice Jonas Woode while delivering his speech at the 38th National Farmers’ Day under the theme Accelerating agricultural development through value addition, underscored the importance of adding value to agriculture.

He said there was a need for stakeholders to reflect on how to overcome the challenges facing the agriculture sector by focusing on how to add value to agricultural products.

He said the Akrofoum district is on course to build a robust, resilient and equitable food system that can withstand shocks.

He said this is evidenced in the success chalked in the implementation of various government interventions in the agric sector.

He said “in our efforts to fulfil this year’s team, the Assembly has as of August 2022 received and distributed 53,000 oil palm seedlings from the Minerals Development Fund to support the PERD program. We are in the process of acquiring an additional 12,000 seedlings. This is anticipated to supply raw materials for the proposed oil palm factory in the district”.

Mr. Woode admonished farmers in the district to embrace the value-addition concept in agriculture. He said it was about time farmers thought about taking their farm produce to the next level of production, which will help reduce post-harvest losses, reduce imports and sets the path for economic growth and transformation.

The District Director of Agriculture Richard Nyamekye congratulated farmers in the District for their immense role in the successful implementation of government’s flagship programmes.

He spoke on the relevance of observing the national farmers’ day celebrations and charged farmers not to rest on their oars but continue to work hard to achieve food security and also set the country on the path of economic recovery.

Traditional and religious leaders, Assembly members and heads of departments were all present.

NDC must review its laws on selection of parliamentary leaders

The Vatican’s envoy to Kinshasa, Archbishop Ettore Balestrero, has told the BBC’s Newsday programme that…